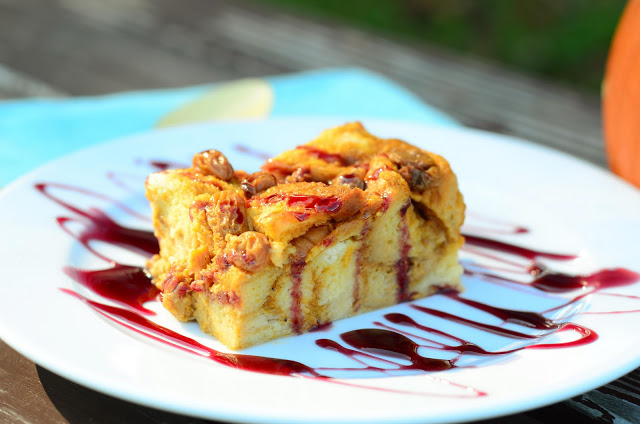 With midterms knocked out, my second monster to battle this week (that spills over into next week), is another thesis assignment. Regressions, numbers and a buddy named STATA will be my companions for quite a while. 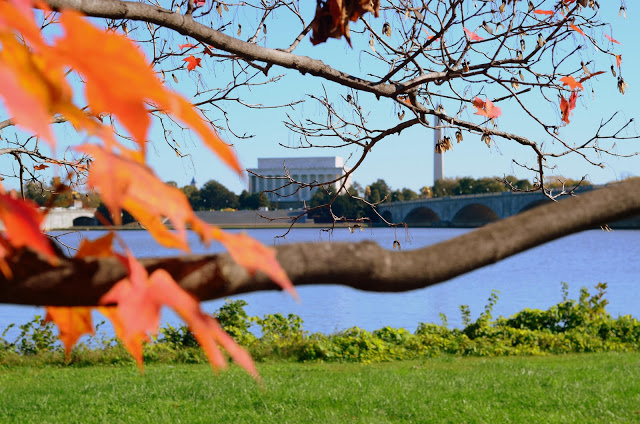 After an astoundingly chilly night with snow, sleet and rain, we ventured out to spend the day at Roosevelt Island. I don’t think I have ever seen snow in October, it feels like fall never even dropped by to say hi.We had a nice sunny day today so a picnic by the G.W. parkway seemed appropriate. 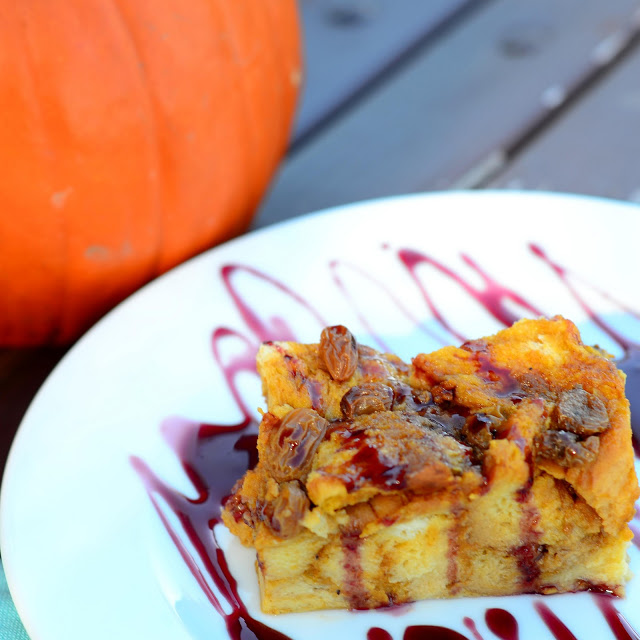 We relaxed, Snoopy sniffed around. The Potomac gently billowed a cool air under the bright sun which made this a great day to be outdoors.Oddly enough, for all the years that we have lived in D.C., we have never visited the island. The central monument inside the island is certainly a must-see and the little marsh trail around is equally breathtaking. 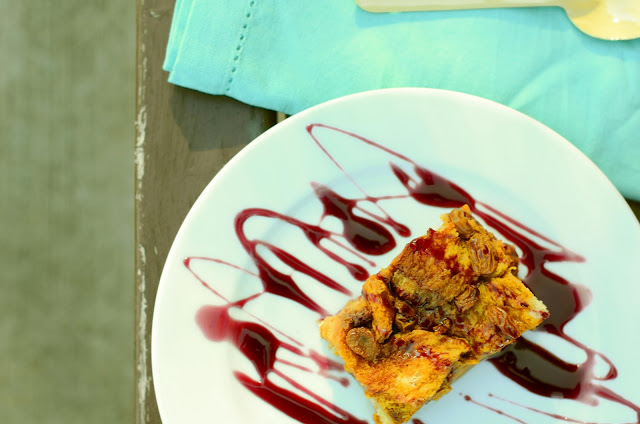 What can be more fun, warm and hearty than a bread pudding, well in my opinion a roasted pumpkin bread pudding! After my recent excursion to the neighboring pumpkin land around the Capitol, I felt compelled to work on a pumpkin flavored bread pudding recipe for my first post, post midterms. I like my bread puddings to be mildly sweet but then drizzled with warm and sticky sweet whiskey sauce. However, this recipe made me change my tune a little, a new wine reduction sauce to replace the traditional whiskey sauce with the creamy orange pudding enmeshed with toasty bread made this a recipe that must be shared.

I flipped the ingredients traditionally used in preparing bread pudding without compromising on taste and quality. There exist a fee good tricks to any good bread pudding is the right type of bread that is correctly toasted. Both sourdough and Challah bread go well with this recipe. I used Challah because I think it is divinely delicious in bread pudding. I normally let the bread soak in the egg mixture for at least in an hour in the refrigerator to let the egg get completely. Baking bread pudding in a water bath ensures that every end is cooked evenly and a nice crust. I use a rectangular pan a little larger than my baking dish filled with tap water. The eggs in the mixture do not overcook and get rubbery this way. Give the mulled red wine sauce a shot which has the perfect complementary taste to the pumpkin and the fall spices in it. 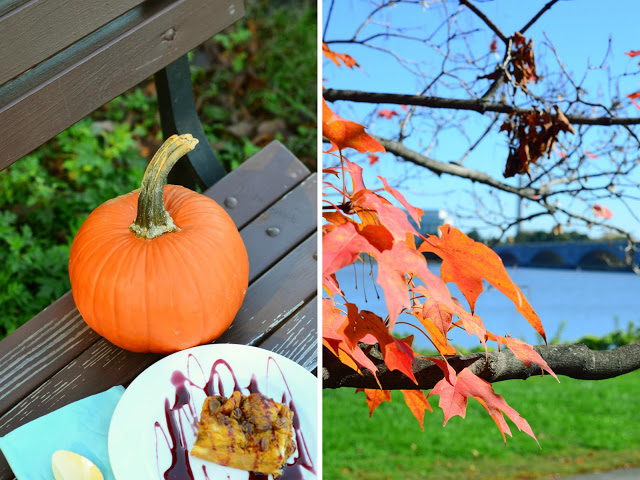 P.S. This also made the perfect picnic snack for our walk today…. 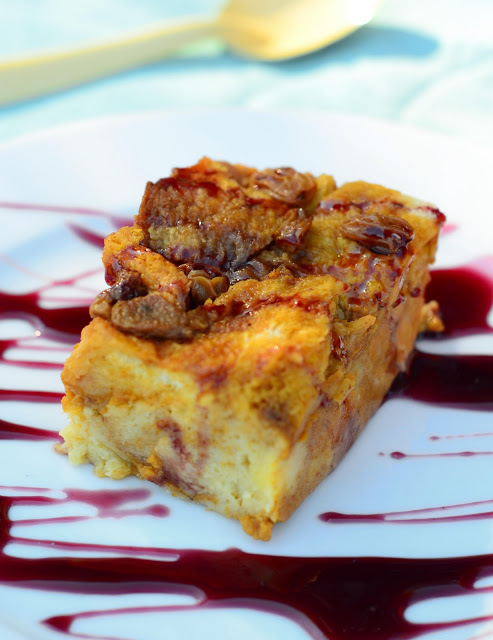 
1. Toast the bread cubes in an oven at 375F for 10 minutes in an even single layer till they get golden brown. Remove and keep aside to cool.
2. In a large mixing bowl, beat the sugar and eggs, followed by the milk, the pumpkin puree, salt, and spices. In a rectangular baking pan (about 9*10 inch rectangular pan), brush the bottom of the pan with about half of the melted butter and then spread the toasted bread cubes in a layer.
3. Pour the entire liquid mixture on the bread and using a spatula gently, firmly press the bread down. Cover the open surface of the pan with cling film and keep the pan in the refrigerator for 1 hour.
4. After the refrigeration, sprinkle the raisins and drizzle the pan with the remaining melted butter.
5. Bake for one hour at 375F in a water bath till pudding is firm (or till a knife comes out clean from the center). Allow the pudding to cool to room temperature in the pan and the chill for about an hour or two before serving. (Note: I sometimes like to eat bread pudding warm but the sauce cool, its just a matter of preference and taste which is the best part of this recipe)


1. In a thick bottomed saucepan, add all the ingredients with the wine and bring to a boil. Then reduce to a simmer and stir occasionally till the wine reduces to a thick sauce (about 1/2 of the original liquid volume should evaporate).
2. Strain the reduction through a sieve and discard the solids. Drizzle the reserve liquid, either hot or cold on each slice of bread pudding before serving. 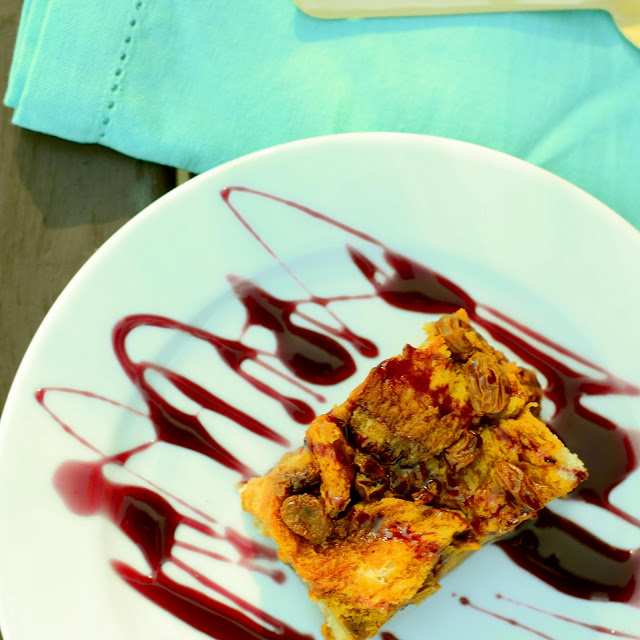 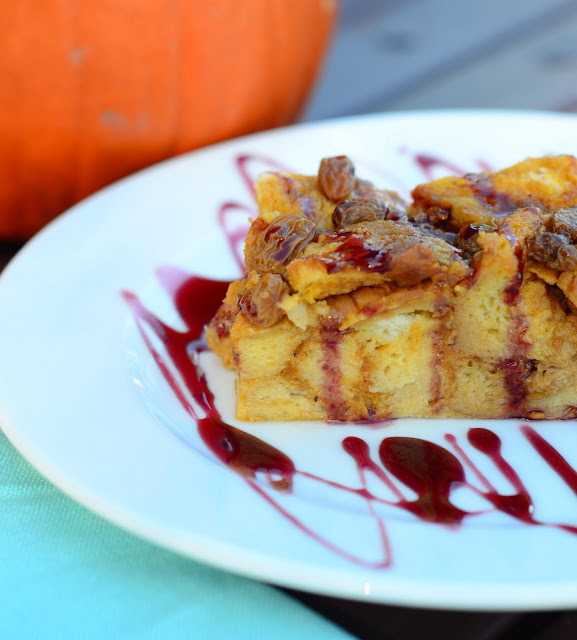