Vacations are supposed to revitalize you, at least that is what I used to think. I have begun to notice that as I get older, vacations are most energizing a few days before and during the duration of the holiday but the days following the trip are most exhausting. Most often, I have blamed “jet lag” as the culprit even when I have traveled within the same time zone. Perhaps, it is rather the re-adaptation of my body to different climates or environments or perhaps these are excuses at my end to disguise my sluggish behavior and laziness. Either way, this week has been overwhelmingly busy and I am tired and already looking forward to another trip. Unfortunately, it appears that things on the horizon are going to get busier with the advent of the final year of graduate school. 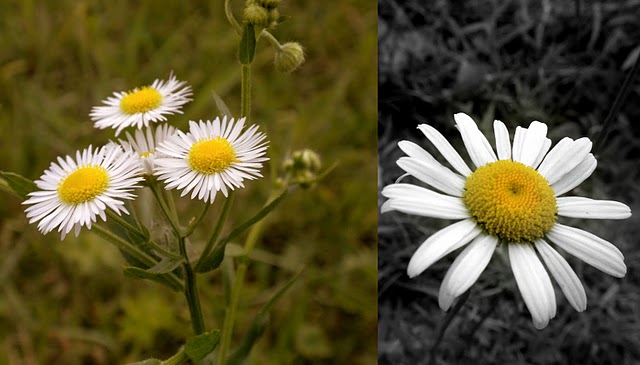 I think its fair to say that I can shift most of the onus of splitting the next few posts to come on my friends Nick and Tamar that are dropping by for lunch this weekend. I’ve been debating on what to do for lunch with them but nothing was coming to mind till I ran into the bag of lemons in my refrigerator. My goal then became to stretch the lemons across lunch and dessert. Does anyone else enjoy the smell of citrus from freshly sliced lemons in the house ? My kitchen smells so wonderful right now that I could do this all over again!

Let me start backwards and begin with my first post in this three-part series on lemons with a recipe for candied lemon slices. I searched for a recipe and then finally landed up with a simple recipe from Martha Stewart that I tweaked a little by adding some ginger to it. Candied lemon slices can be used to decorate almost any dessert or simply enjoyed with tea. The trick to getting sweet and non-bitter lemon slices is cutting them as thin as possible and even. I used a knife but a mandolin slicer would probably make things easier. I used two lemons because the center gives the largest slices and the least amount of pith (which is where all the bitterness of the lemon is concentrated) relative to the rest of the lemon. Avoid using any copper based or any other acid-reactive metal utensils with lemons or they will react and damage the utensil and the food being prepared.


yield: About 12-20 slices depending on size and thickness of the lemon cuts


1. In a large nonreactive skillet,bring one cup of water to boil.
2. In the meantime, using a good quality sharp knife cut the lemons half way in the center to get thin and even slices. Remove the seeds carefully and handle the slices gently using a fork or a pair of tongs. Carefully add the lemon slices to the boiling water and let them cook for 7 minutes to remove any bitterness. Immediately transfer each lemon slice into an ice bath to stop the cooking process.
3. After discarding the spent liquid in the skillet, dissolve the sugar and the remaining 3/4 cup of water and bring to a boil. Reduce the flame to a slow medium and add the individual lemon slices in one single flat layer along with the ginger juice. It should not boil but simmer slowly. The lemon slices will cook for about 45minutes -1 hour depending on the thickness of the slices. The lemon slices will be ready when they become translucent. The sugar may get brown but it should not caramelize. Carefully remove the slices and let them dry out individually on a wire rack after spraying it lightly with oil. The slices should dry for at least two hours and then removed and stored in air-tight container. 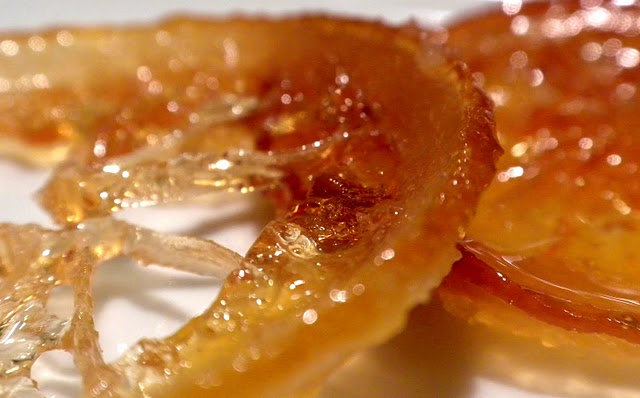 I saved the lemon infused sugar syrup that was left behind and used it to sweeten my ice tea which gave it a wonderful lemony-ginger taste. Another tip on storing the lemon slices, cut squares of wax paper and put them between each slice for easy removal when you need them.