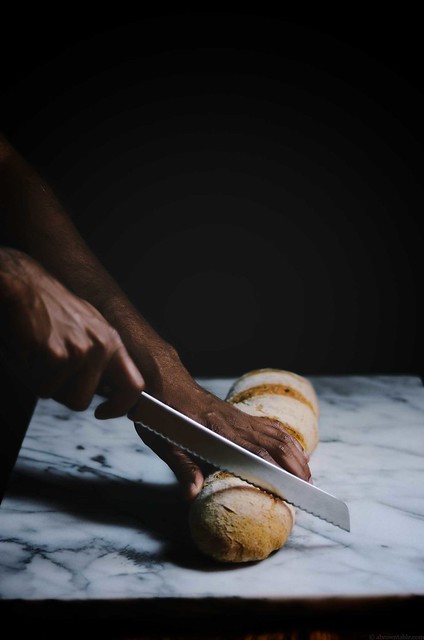 If there is one food that I could probably find hard to live without, it would have to be bread. The scent of freshly baked bread from the oven is intoxicating but there is also something equally exciting about preparing bread from scratch at home. When I first started to cook, I found bread making a challenge, I’d end up with “loaves” that would have made better door stoppers or paper weights. After a few tries, I was almost ready to give up until I came across a few cookbooks that were solely devoted to baking bread and I decided to give another shot, perhaps I still had hope.

Among the bread cookbooks that I treasure the most, one of my personal favorites, is “The New Artisan Bread in Five Minutes” by Jeff Hertzberg and Zoë François. They’ve made things simple and easy, which for me is a win-win all the way! I’ve made several of their breads at home and they never fail. It’s one of the bread cookbooks that showed me the light! 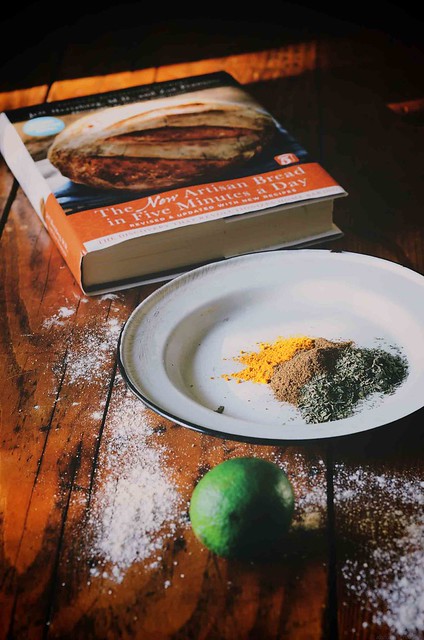 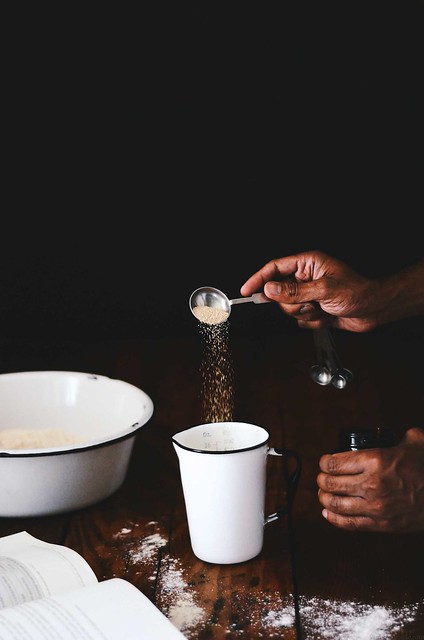 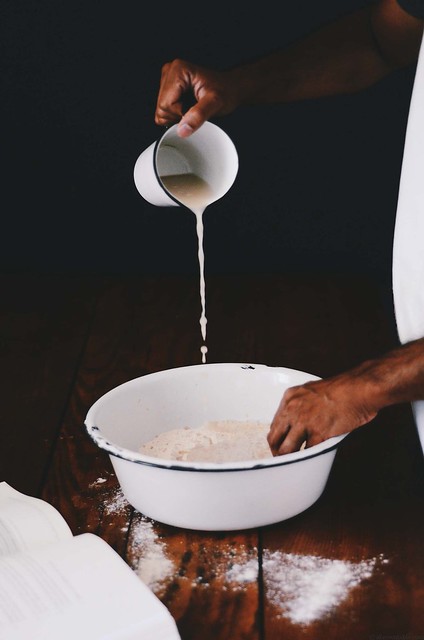 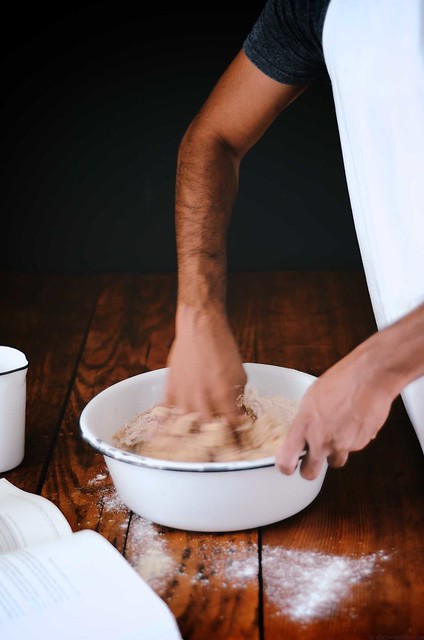 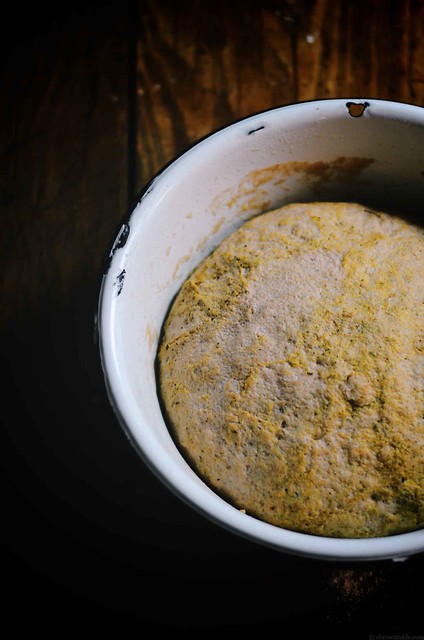 My dad had a favorite bakery, it wasn’t really close to where we lived (and we had other bakeries that were closer) but for some reason he’d insist on getting his “masala bread” from here. Masala bread was a baguette-shaped bread that was buttery and soft mixed with spices, it was tasty but I hated making the trek out to get this loaf. With all the traffic congestion in Bombay, it probably took me an hour and a half to two, to get this loaf of bread! And I complained and whined, but finally when I did sink my teeth into it, I’d remember why the long journey was worth it.

Today, I’m sharing my version which is whole-wheat and every bit as delicious as the one from Bombay. You can also find this recipe on Steller. 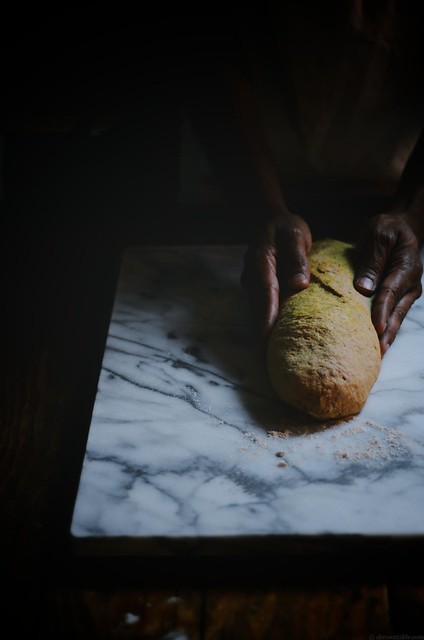 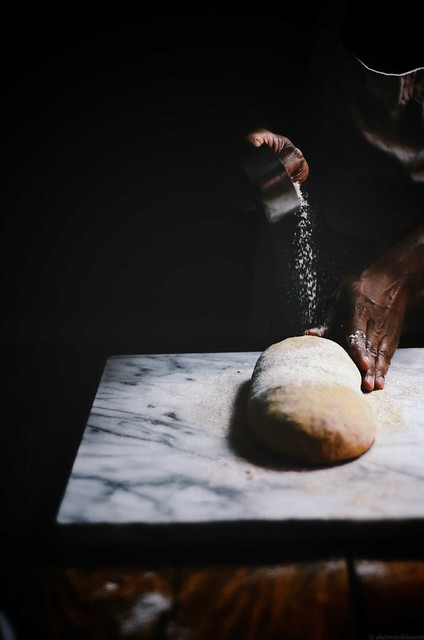 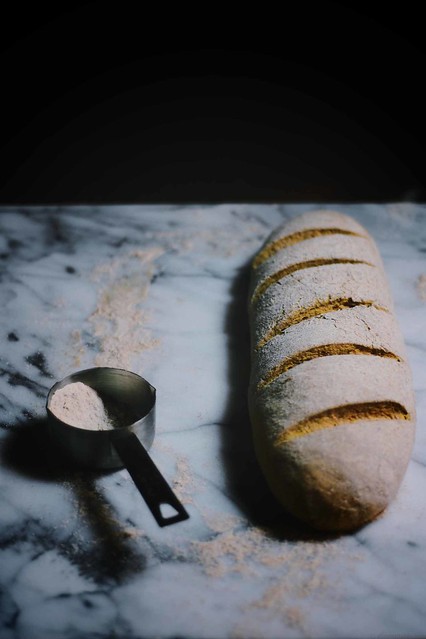 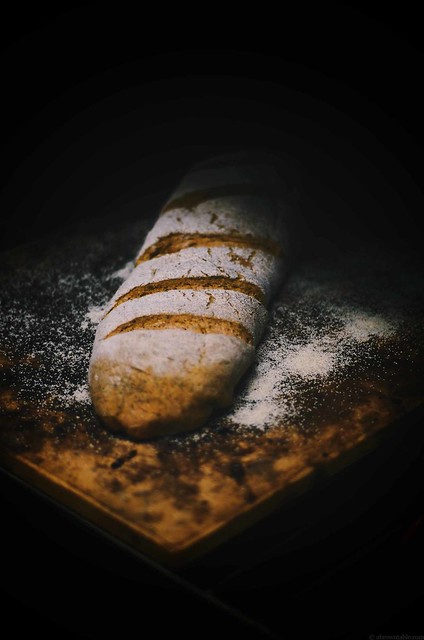 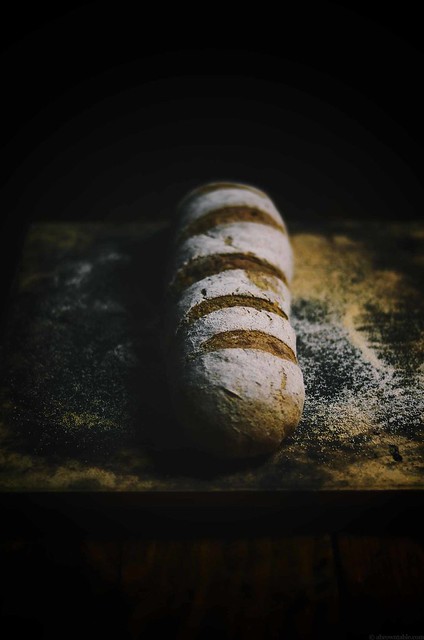 cornmeal or parchment paper for baking

1. Mix the turmeric, garam masala, oregano and lime zest in a small bowl and keep aside until ready to use.

2. Add the salt, yeast and sugar to the water and stir.

3. Place the flour in a large mixing bowl. Make a well in the center and pour the liquid mixture into the center. Stir with a wooden spoon or with your hands until almost combined. Toss in the spice mixture from earlier and combine until it forms one large sticky ball of dough.

4. Cover the dough (not airtight), allow the dough to rest at room temperature for about 2 hours. The dough will rise and collapse. (you can keep the dough in a well oiled bowl to rise).

5. On a clean surface, using wet hands quickly shape the dough into a ball by stretching the surface of the dough around to the bottom on all four sides rotating the ball, a quarter turn, as your proceed. Shape into one 10 inch-oval loaf.

6. Lightly dust the loaf with a little flour. Using a sharp serrated bread knife, make 5-6, half-inch cuts along the length of the loaf. Allow to rise for one hour, uncovered on a pizza peel covered with a little cornmeal or on a sheet of parchment paper.

7. Place a place a wire rack in the middle of the oven. Then place a pizza stone on the rack. Place a second wire rack with a metal baking sheet (don’t use glass) on the bottom shelf of the oven. Preheat the oven to 400F.

8. After the bread has risen for 1 hour, generously sprinkle cornmeal on the surface of the heated pizza stone.

9. Carefully transfer the loaf using the pizza peel or parchment paper onto the hot stone. Pour a cup of tap water (at room temperature), onto the lower baking sheet, immediately shut the oven door. Bake for about 20-25 minutes until the surface of the loaf is firm to touch and deeply browned on the surface.

10. Once the bread is baked, remove from oven and allow to cool on a wire rack. Slice the bread with a sharp serrated knife and enjoy!