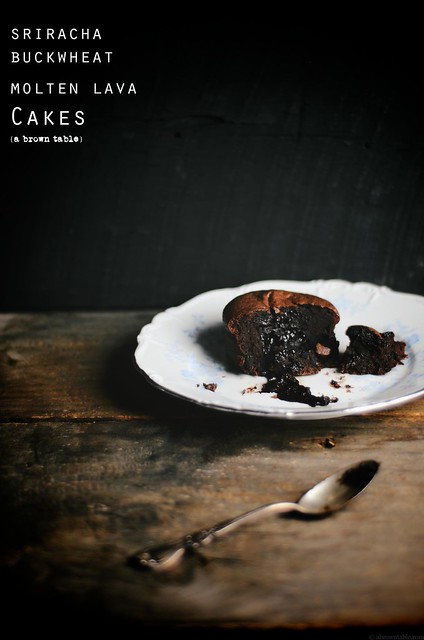 This is probably the craziest yet happiest batch of little things I’ve baked in a while. My not-so-secret obsession with all things chocolate and Sriracha hit it’s peak this week when I decided to travel down the path of mixing them together. Maybe they might get married someday and make a happy couple, one could only hope! 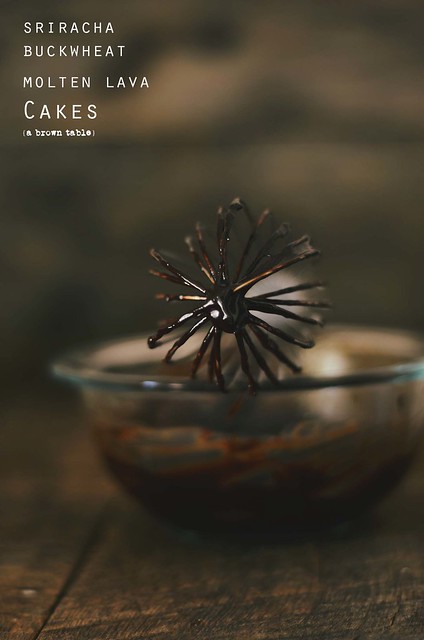 Until now, I had never baked a lava cake, so I scrounged around for several recipes in my stack of baking cookbooks (that are unpacked yet literally piled against the wall of the living room like the entrance to a some ancient monument…..I’ll eventually deal with this soon, hopefully), unfortunately I didn’t have a recipe in any of my books (could also be an excuse to get more cookbooks)! I went online and found one that looked pretty easy to prepare and decided to take the plunge down the hole that looked dark and messy yet held a promise of sweet peppery goodness. 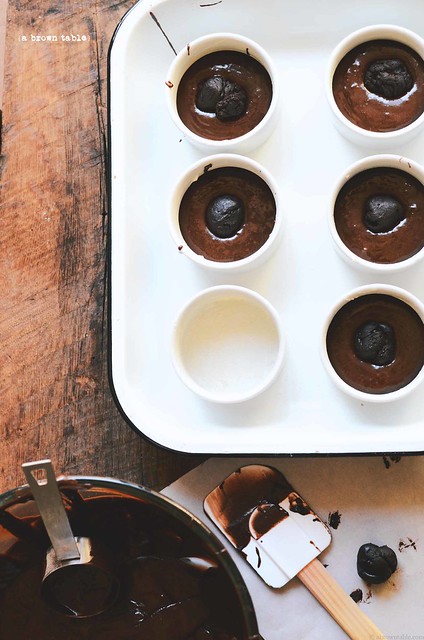 Buckwheat is by far one of my favorite whole grain flours to work with because it has such a lovely color and flavor. Indian cooking uses a lot of whole grain flours but buckwheat is a flour that I came across after I moved to the US and I love, love it! I’ve adapted the original lava cake recipe from one of my trusted cooking magazines,

and substituted the flour with buckwheat among a few other ingredients. 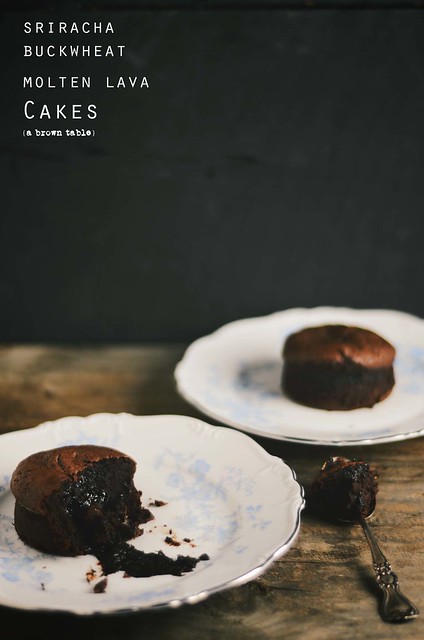 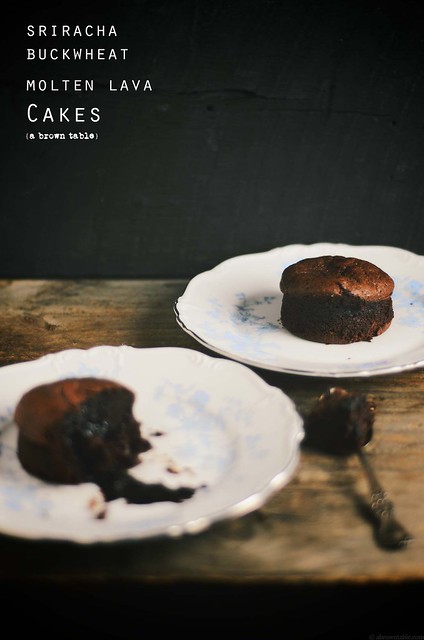 Here are a few notes that I made during baking and I wanted to share with you;

Also, if you don’t like Sriracha you can leave it out from the cakes and make yourself a whole grain buckwheat lava cake. 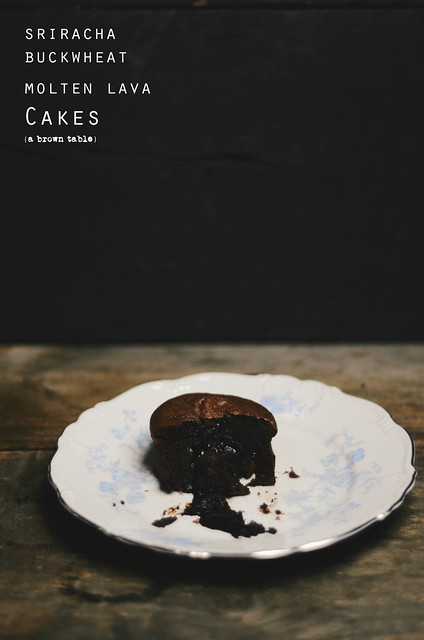 confectioners sugar for dusting (optional, I did not do this)

1. Heat the coconut milk (or heavy cream) in a medium sized saucepan over medium high heat until it just begins to simmer. Remove from the stove and pour it into a heat proof bowl containing the chocolate chips. Whisk until the chocolate melts into a smooth paste. If the chocolate doesn’t melt completely, microwave carefully for 10 seconds, just be careful not to burn the chocolate.  Once the chocolate forms a smooth silky sauce, whisk in the sriracha. Over the bowl with cling film and allow it to chill completely for at least 30 minutes.

2. Remove the bowl from the refrigerator once the chocolate is chilled. Divide into 6 equal parts and mold into small truffles/balls. Place each truffle onto a sheet of parchment paper and refrigerate until ready to use.

3. Place a wire rack in the center of the oven and preheat to 450F. Take 6, six ounce ramekin bowls and grease them with butter and then dust them generously with flour. Place the bowls on a baking sheet/tray and refrigerate until ready to use.

4. Melt the butter and chocolate in a medium sized saucepan, stir until combined. The mixture will resemble a smooth silky sauce. Remove from stove, once completely combined and then cool for about 10 minutes. While the chocolate is cooling, whisk the sugar, vanilla, salt and eggs in a large mixing bowl with an electric mixer on medium-high speed until the batter turns pale yellow and fluffy. This will take about 4-5 minutes. Finally, beat in the melted chocolate mixture followed by the flour. Divide half of the batter between the ramekin bowls, then place a truffle in each bowl and cover each bowl with the rest of the remainder batter. Even out the surfaces of each bowl with an offset spatula and bake them for 15 minutes until the cakes are just set (they will rise a little). Remove from oven and allow to cool for 2 minutes.

5. Run a sharp knife around the edges of the ramekin bowl and immediately invert onto an individual serving plate. Tap gently to release the cake. Dust with confectioner’s sugar. Repeat with the rest of the cakes. Serve immediately.